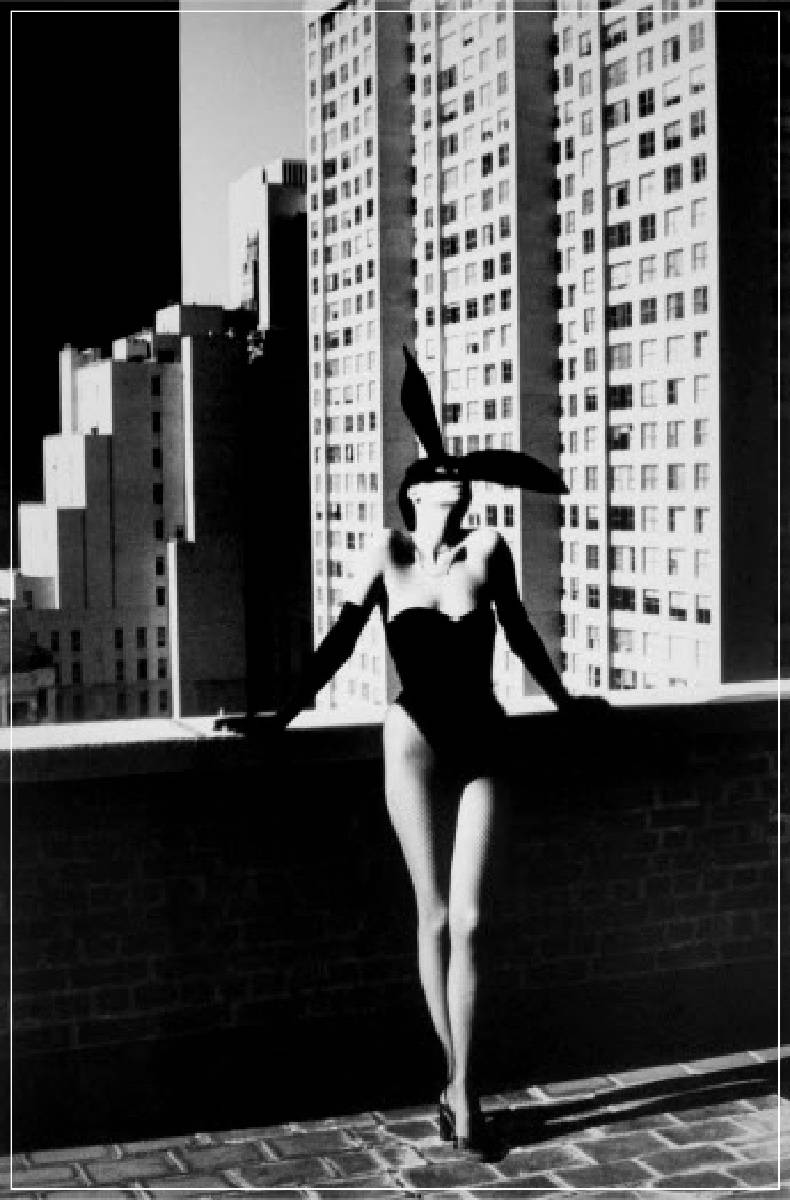 Perhaps Newton’s most iconic work that followed on from the work he did for Playboy, ‘Elsa Peretti in Bunny Costume’ is a lasting image of the 1970’s. Newton shot this work in New York amongst the towering skyscrapers that characterize the American Dream, equally epitomized by the Playboy lifestyle in the 70’s. In it, Newton features the iconic motifs of his work- casting the intimacy of the night into the reality of the day, the clothing of the private into the sphere of the public and perhaps most masterfully, the voyeuristic gaze. From every window within the skyscrapers, we sense powerful gazes looking down on Peretti. 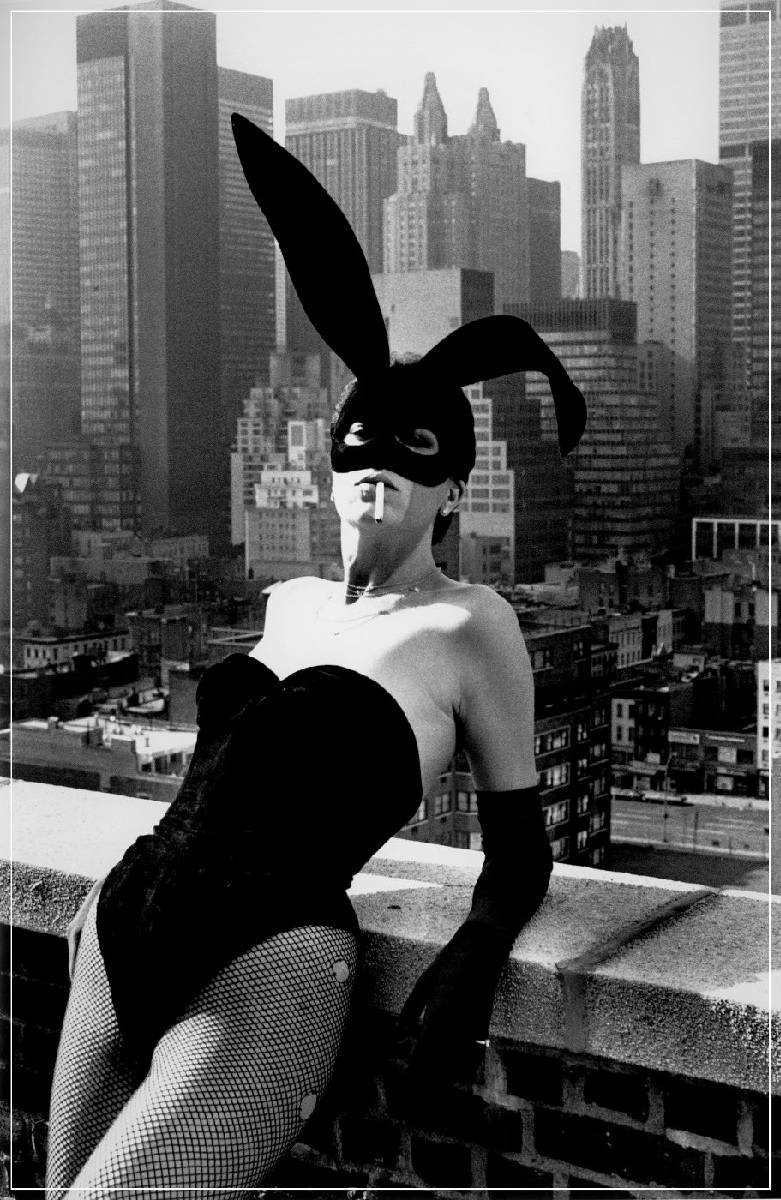 Helmut Newton (1920-2004) was one of the world’s most celebrated photographers whose uniquely edgy imagery is coveted worldwide by collectors and aficionados of photographic art. Global Images carries a gorgeous collection of rare pre-1985 original vintage prints produced in small numbers from a series of transparencies that Newton considered his most provocative and important work through 1985. Unsigned at the time, they were sent out to major publications to stimulate interest in a photographer’s work. Most examples of Helmut Newton photography were destroyed or written over, it is very rare to find them in immaculate condition. Helmut Newton photography is coveted by collectors worldwide with auction values increasing steadily. Rare signed Silver Gelatin prints are available upon inquiry.

Newton created a working space for his models that was part decadent and part unorthodox — a safe microcosm in which fantasies became reality. And perhaps most famously of all, Newton engendered an environment in which his female models claimed the space around them with unapologetic poise and commanding sensuality. His almost cinematic compositions provided a hyper-real backdrop for the provocative images of sculptural, larger-than-life women, and enhanced the themes of voyeurism and fetishism that run throughout his work.

Amazingly, despite the fact that Newton was known for his erotically charged photography, it was not until he was 59 years old that he shot his first nudes.
“It was not until 1980 that I photographed what I consider to be my first nude. In quick succession I executed the Big Nudes, the Naked and Dressed, and, in Los Angeles, the Domestic Nudes series. The fact that the models in these photographs were the same girls I used in my fashion work gave them a certain elegance and coolness that I was looking for in my work.” - Helmut Newton - on models. "American Photo", January/February 2000

This collection of Helmut Newton photography vintage prints were gifted to Newton’s agent Norman Solomon, in recognition of the work he had carried out in promoting Newton’s “Private Property” series of exhibitions in 1985. The print comes with a Certificate of Authenticity signed by Norman Solomon. The ownership rights of this print are supported by an original agreement with Newton in 1984, and supplemented by a further agreement with The Helmut Newton Estate in 2012. They have been stored in conservation condition and are excellent examples of vintage Helmut Newton photography.

If for any reason you are not completely satisfied with your Original Helmut Newton purchase, you may return your Helmut Newton photography if it's unopened from it's original packaging (you are responsible for applicable return shipping costs) within 14 days of purchase and it will go back on the card it was purchased on.

In 1983 Norman Solomon traveled frequently between Los Angeles, San Francisco, New York, London and Paris and took up residence in Paris on the Blvd St. Germain where he worked on the development of an innovative television project, World Access Television, dba You-TV, for introduction to American audiences. During his days and nights in Paris he mingled and socialized with mostly European friends one of whom was John Dunnicliff, a Brit who had become the Paris Agent for many top photographers including David Hamilton and Helmut Newton.

At this time Norman was dating a German photographic model and cavorting with friends, including Mr. Dunnicliff. He enjoyed life in the City of Light and also traveling. In early 1984, via an introduction by Mr. Dunnicliff and in the company of his German girlfriend, Norman was introduced to Helmut Newton. Although knowing little about photography, after a few encounters with Mr. Newton, Norman introduced an idea to Helmut that he produce a boxed ‘Portfolio Collection’ of his best works to date in addition to him just printing individual prints of his work in a variety of sizes. Helmet embraced the idea and commissioned Norman to raise the funds and produce the collection.

Up to that time, John Dunnicliff managed Helmut Newton’s bookings and introduced Helmet’s works to a variety of publications and individual clients, via showing Helmut’s prints and transparencies to interested parties. At that time, Mr. Newton, with Mr. Dunnicliff's help, established himself as one of the world's most coveted photographers with frequent stories and photographs appearing in Vogue magazines internationally and with clients such as Yves St. Laurent.

Although photography was not as yet considered a valuable collectable, Mr. Solomon raised the funds to produce a boxed edition of seventy-five collections consisting of forty-five, 16×20 signed, silver gelatin Helmut Newton prints, titled ‘Private Property.’ Via a formal agreement with Helmut, Norman was granted the exclusive opportunity to sell the Private Property boxed collections that Mr. Newton kept in storage at Sotheby’s. Helmut Newton released the 45 signed print, boxed collections to Norman for $7,000 per box that Norman introduced at $13,500 in 1985. Norman and John Dunnicliff were each also promised a collection plus Norman was to receive 10 ‘Artists Proof’ collections to be used promotionally and as exhibition sets/prints.

Norman organized Private Property opening exhibitions in 1985 at the A,B,C,D Gallery on the Rue de Lisbon in Paris, then the Hamilton Gallery on Carlos Place in London and at the Staley-Wise Gallery on Prince Street in New York’s SoHo and finally at the G. Ray Hawkins Gallery on La Brea in Los Angeles. Although the Helmut Newton Private Property Collection was offered for only $13,500 at the time, very few sales were consummated. Overall the exhibitions fell short of expectations leaving a large inventory of unsold images.

Most sales were made to individual buyers/dealers in San Francisco while just a very few sold via the gallery openings. Therefore, outside of sales, the few that Norman purchased from Helmut were sold prematurely, prior to 1992, at relatively low prices. It wasn't until after Helmut's passing, due to a heart attack while driving out of the Chateau Marmont in Los Angeles in 2004, that prices for the Private Property Collection, and for Helmut’s signed works in general, began to skyrocket.

In a settlement with the Helmut Newton Estate in 2013, Norman & John Dunnicliff were granted a series of transparences produced by Helmut Newton as well as prints that were used for introductory purposes from 1978 through 1984 plus ‘hand inscribed’ Polaroids of contact sheets, that Helmut considered his most important work during that period.

Norman also produced a series of Helmut Newton Posters that were used for promotional purposes, some of which were featured and sold during the summer of 2013 at the Helmut Newton exhibition at the Annenberg ‘Space for Photography,’ in Century City, Los Angeles.

Now that you have learned about the Norman Solomon Collection, please take a moment to look through these fabulous pieces.

These artworks are currently among some of the only Helmut Newton works being offered to collectors across the world. These pieces you find on our site are extremely rare.

We are honored to present these works to those who appreciate them as much as we do. 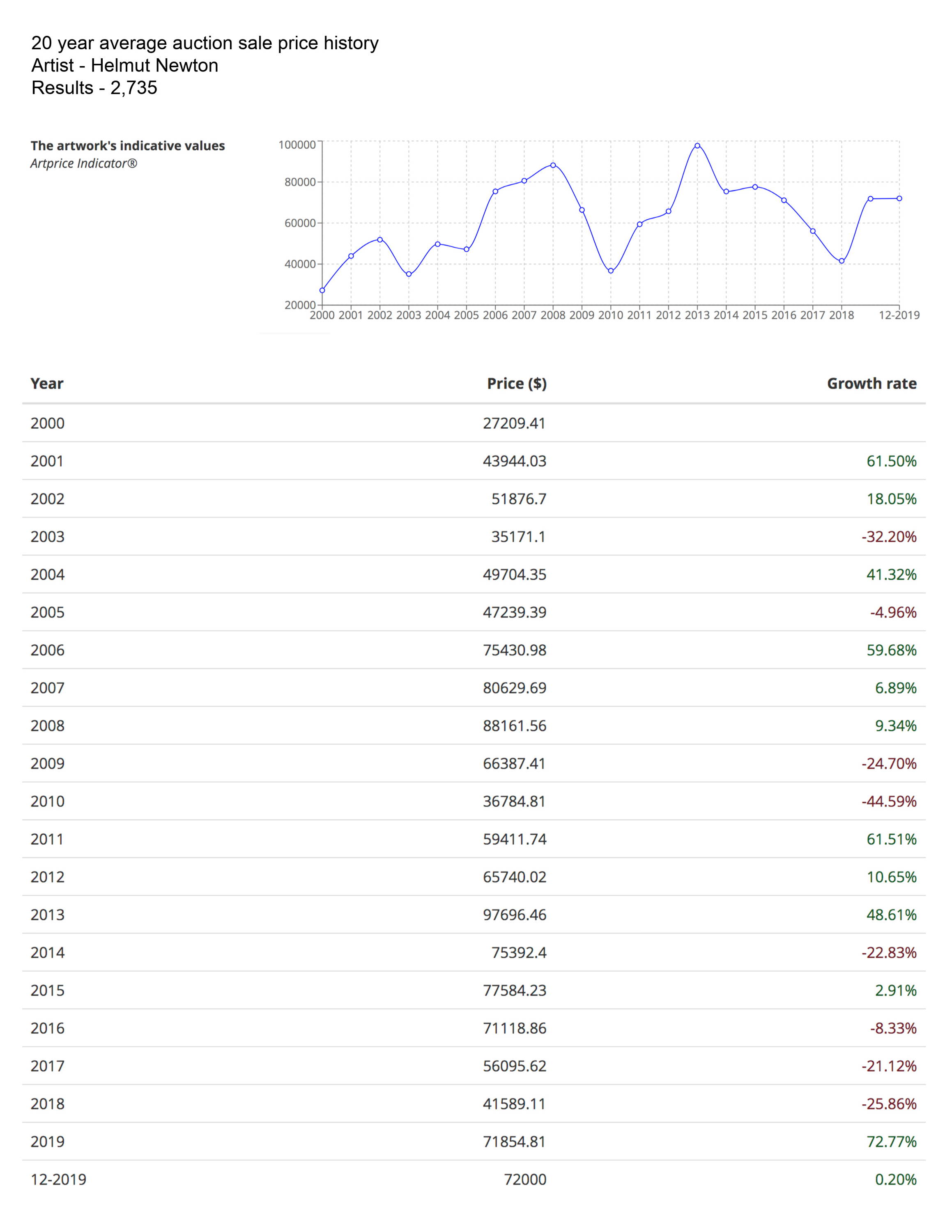