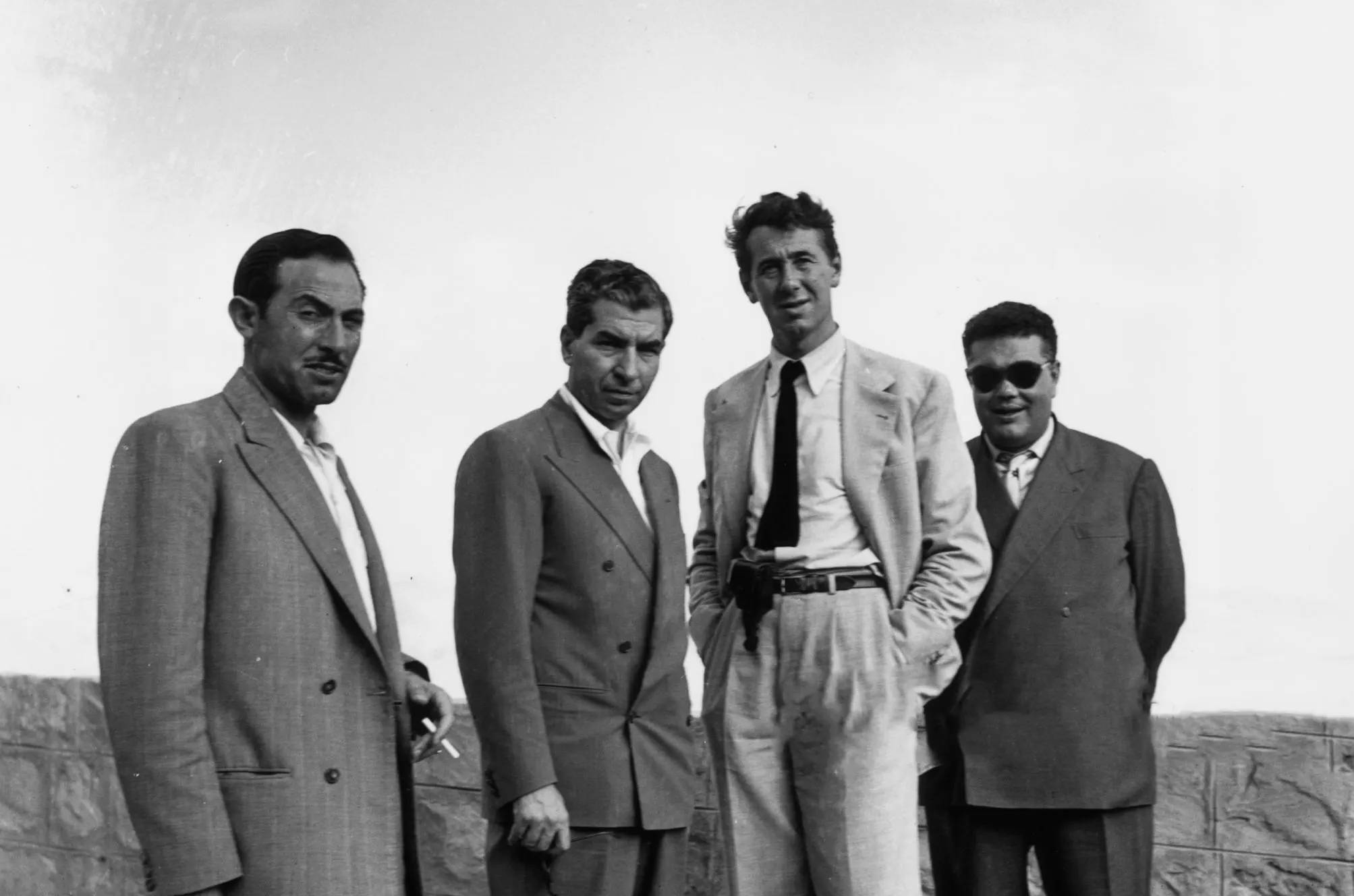 Slim Aarons with Charles "Lucky" Luciano in Sicily during the gangsters exile.

"Charles 'Lucky' Luciano was a Sicilian born American gangster that rose from being a teenage hoodlum in New York City to the head of the organized crime family that eventually became known as the Genovese crime family.

Luciano arrived in New York City with his immigrant parents in 1907 and moonlighted as a narcotics runner, hoodlum, and mob hitman over the next several years until he was abducted in 1929 and a group of men beat him so severely they left him for dead. A police officer found him and took him to the hospital where he miraculously survived. From that day forward he was known as "Lucky".

In 1928 a feud broke out between the Masseria and Salvatore Maranzano crime families. Dubbed the Castellammarese War after the Maranzano’s Sicilian home town, the two-year struggle left dozens of mobsters dead.

Luciano formed connections with second-tier leaders and in 1931 arranged to have Masseria killed following a lavish lunch at a Coney Island restaurant. Maranzano, who became New York’s criminal “Boss of Bosses” after Masseria’s death, made Luciano his lieutenant but soon planned to have him murdered. When Luciano learned of the plot he sent his own men to assassinate Maranzano. In 1931, after powerful bosses Giuseppe 'Joe the Boss' Masseria and Salvatore Maranzano were assassinated, Luciano inherited the organization that would eventually become known as the Genovese family." 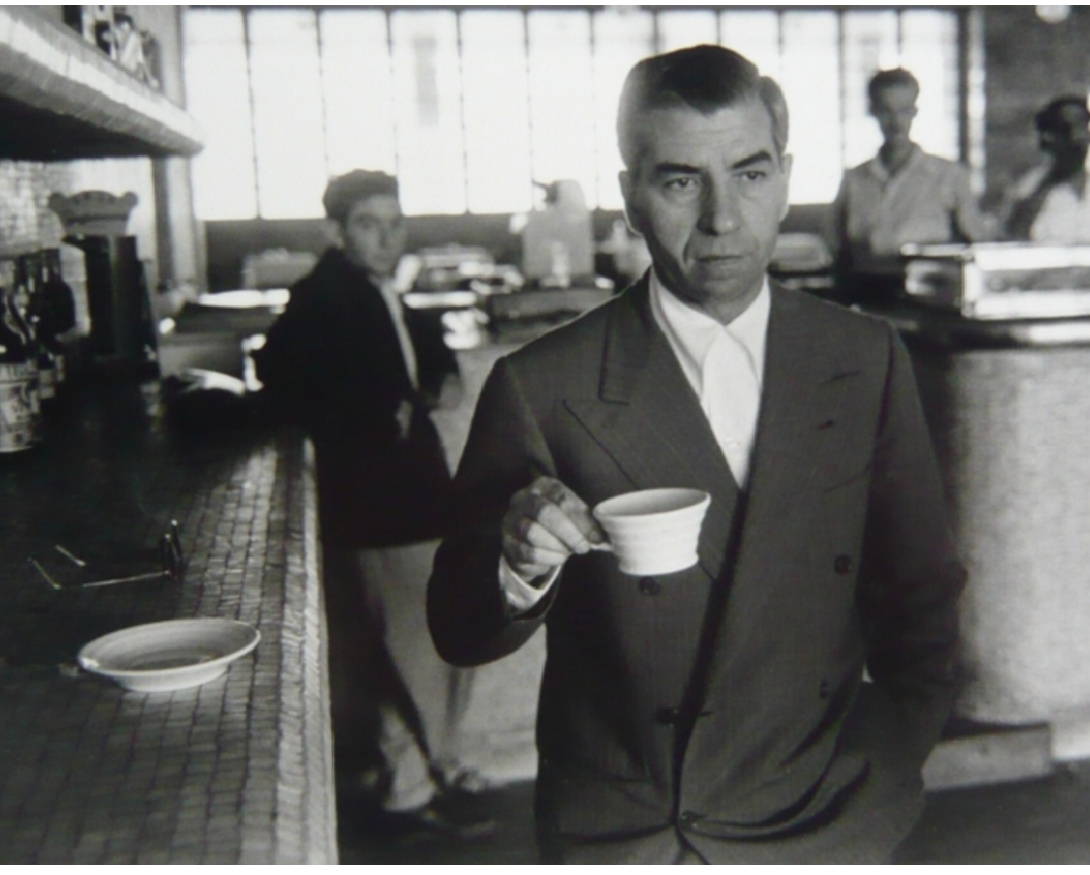 As Luciano graduated to near celebrity in New York City, his status and reputation not only gained him notoriety with law enforcement, it attracted thousands of fans. As Slim Aarons was beginning his career photographing celebrities for fashion publications he ran across a celebrity gangster in Luciano who was front page material. Aarons captured several iconic images of Lucian during this time period, mostly of him coming or going from a Courthouse.

In 1936 Luciano was convicted of 30 counts of prostitution and sentenced to 30-50 years in prison by new New York City Prosecutor Thomas Dewey. For most this would be the end of a career by Luciano was just getting started and spent the next decade in prison forming the syndicate, which became the structure for organized crime moving forward. After nearly a decade in prison, Luciano was called on by the city and now New York City Mayor Dewey to assist in keeping the peace and preventing violence on the docks during World War II. Luciani helped and after the war received clemency from Dewey who reduced his sentence but exiled him to italy and banned him from setting foot on US soli forever.

During his exile in Italy, Luciano spent time with family and friends and managed his billion dollar enterprise from afar. During the period of exile, Aarons visited the gangster in his hometown and captured several iconic images, many of which have never been released. 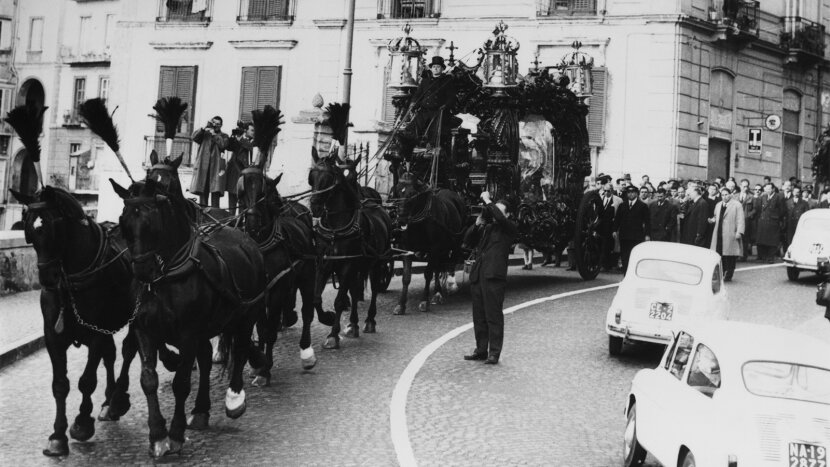 A funeral procession with a horse drawn hearse with the body of Charles "Lucky" Luciano after his death in Naples, Italy.

Luciano passed away from a heart attack on January 26, 1962 at Naples International Airport. A beautiful funeral service was held by the city and featured a horse drawn hearse with Luciano's body in a casket. Luciano's relatives obtained permission from the United States government and returned his body to America where he was laid to rest in St. Johns Cemetery in Queens, New York.