James Dean's sexuality is still a highly discussed topic when it comes to old Hollywood mysteries. Friends and family have identified him as "gay", although in past interviews he would deny claims, but not entirely shut them down. It's most likely that Dean's sexuality was more complicated than black and white and it's suspected he identified with being bisexual or something similar. Regardless of his orientation, while in the spotlight he did have a few romances with some of Hollywood's most beautiful women. This includes his short-lived fling with future Bond Girl actress, Ursula Andress.

She was just 19, and Dean 24, when they began their relationship. It was rumored to be rocky right off the bat, so it didn't last long. It's believed by many that their relationship was a publicity move. One of their most public moments as a couple was at the Thalian's Ball at the famous Ciro's Nightclub in 1955. 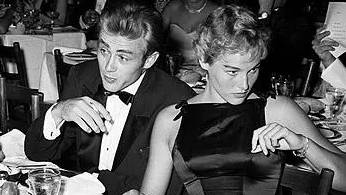 Because the two didn't have a very stable relationship, tabloids had a field day reporting on all the drama between them. On their first date, before Dean was supposed to travel to Texas to film GIANT, he didn't leave such a great impression with the Swiss actress. While at a Jazz Club, Dean abandoned Andress to play drums with the band. His date didn't appreciate this much and left shortly after. "I don't like to be alone, so I went home," she explained. Being the gentleman that James Dean is, he drove up to Ursula's house to apologize and take her out for hot chocolate.

This would seem to set the tone for their relationship. It was reported by the press that Dean had been practicing German so he could argue with Andress, since she wasn't very fluent in English yet. Both actors described their relationship as passionate, and full of arguments. "We fight like cats and dogs. No, on second thought, like two monsters," Dean described. "But then we make up and it's fun. Ursula doesn't take any baloney from me and I don't take any from her. I guess it's because we're both so egotistical."

Their date night at Thalian's Ball would be their last public appearance together. Dean tragically passed away only a month later.