Rue Aubriot is named after Hugues Aubriot, provost of Paris under Charles V. The latter is known to have taken measures of leniency with regard to the Jews of Paris. For this, he was accused of impiety, imprisoned in the Bastille, then released by mutineers. He is also the builder of the Bastille, on which he laid the first stone on April 22, 1370. It is also has the first sewers of Paris with vaults, docks and bridges.

Vibeke Knudsen standing alone in a lamp lit Parisian street. Styled in a deliberately androgynous outfit made up of Yves Saint Laurent's cult Le Smoking dinner jacket, pin-striped wide leg formal trousers and white tie, the photograph was to immortalize the Yves Saint Laurent aesthetic that took over the 70’s. Newton loved to shot outdoors and this night-time scene, using only the street lighting available, was directly drawn from the nocturnal photographs of his hero, Brassai. Recalling the shoot in an interview with New York Magazine in 1988 Newton said: 'Vibeke was a girl I often worked with in those days. The idea was a man-woman standing in the street at night - the street, in fact, in Paris' Marais district, where I lived for 14 years.’ Newton’s own house can be seen in the background. 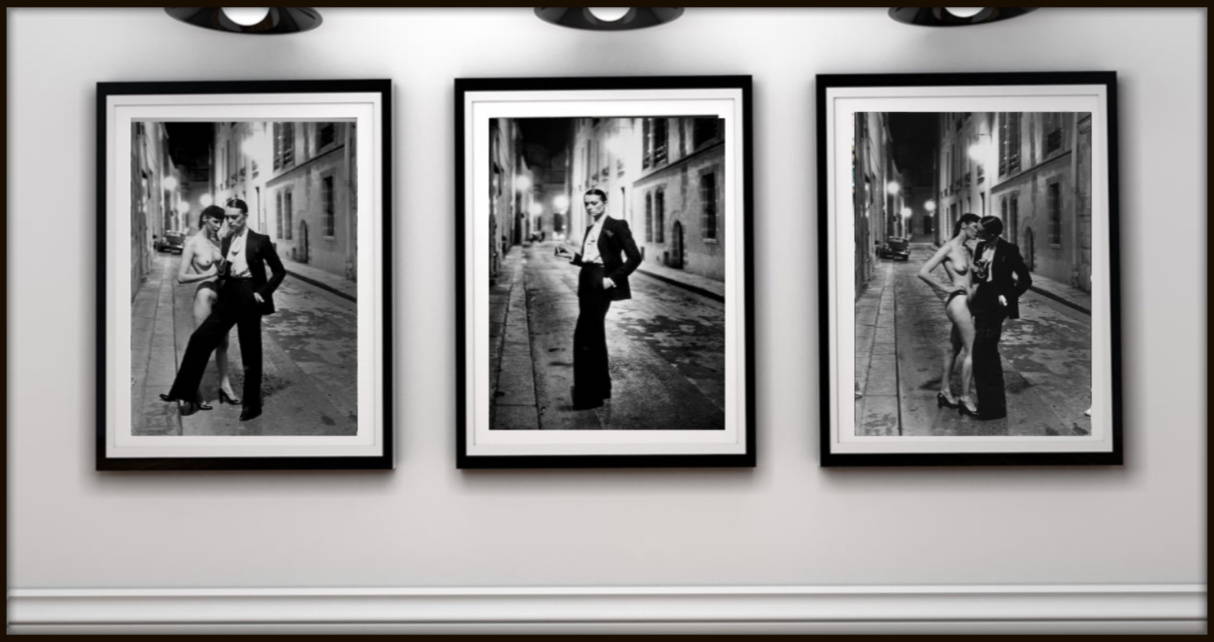 Helmut Newton was born on October 31, 1920, in Berlin, Germany. He attended the American School in Berlin. From an early age, Newton developed a keen obsession with photography, purchasing his very first camera aged 12. Four years later, Newton was to turn his back on mainstream education, taking an apprenticeship with renowned German photographer, Elsle Simon, known as Yva. Her surreal, multiple exposure photographs that took in fashion, theater and the nude were to inspire Newton throughout his career.

On November 9, 1938, Newton, secured passage to China, where he stopped in Singapore until 1940 before leaving to Australia and finding work as a truck driver in the Australian Army.

In 1948, he married actress June Browne, herself a photographer under the name of Alice Springs, a name she chose from a map of Australia. High-profile contracts with Australian Vogue in the 1950’s; British Vogue in 1957–1958; French Vogue in 1961 provided Newton with the exposure that would allow him to stamp his style on fashion photography over the next 40 years.

Known as the ‘King of Kink’, Newton’s erotically charged imagery was provocative as it was masterful in its compositional and narrative direction. Creating highly charged images layered with voyeuristic, sadomasochism undertexter, Newton was drawn to empowered woman presenting a potent image of female sexuality in the 60’s and 70’s. Ironically enough Newton did not shoot nudes until the latter part of his career in the 1980's and 90's although it is what he in indelibly remembered for.

Newton died, aged 83, in 2004 following a major car accident in Los Angeles, California. Newton had a heart attack as he was pulling away from valet at the world famous Hollywood hotel Chateau Marmont.

Thanks!
This field is required
Filed in: #blackandwhitephotography, #couturefashion, #helmutnewton, #rueaubriot, #vintage, ysl
Share:
Share on Facebook Tweet on Twitter Share on LinkedIn Pin on Pinterest
Previous article “Rags to the Ritz - How Photographer Slim Aarons Charmed his Way into Hollywood Royalty”
Next article The Side of James Dean Never Heard.  Excerpts From The Actor's Autobiography Discovered After His Death</p>