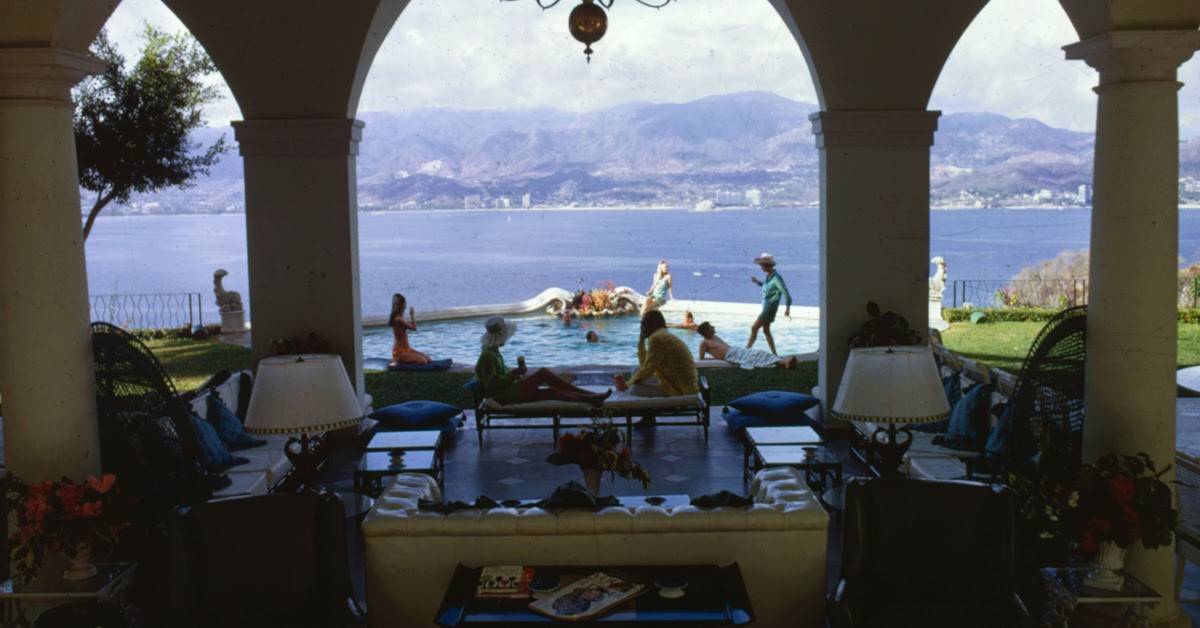 “Acapulco Villa” (1968) by Slim Aarons. Photograph of the home of Eustaquio Escandon in Acapulco.

Learn More about Slim Aarons, One of the Most Iconic Photographers of Hollywood’s Golden Era, and the Basis for Alfred Hitchcock’s Classic Film Rear Window.

You may have heard of Alfred Hitchcock’s seminal film Rear Window (1954), but did you know that it is based on a real person? In the film, Jimmy Stewart plays J.B. Jefferies, a professional photographer who is forced to stay inside during a heatwave due to a broken leg. Throughout the film, we see Jeffries observing the everyday lives of his neighbors, yet through Hitchcock’s masterful storytelling and discerning eye, even the most mundane activities can feel dramatic. While Rear Window is an undeniable classic, few know that Stewart’s character is based on a real-life photographer: Slim Aarons. As he was preparing for the film, Hitchcock asked Slim Aarons to take a series of photos of New York apartments that he would go on to use to create the sets for the film. Hitchcock even based the legendary apartment that Stewart sits in for the entire film on Aarons’ own New York studio! The film’s main character was originally supposed to be a writer. But after Hitchcock met Aarons, he was so dazzled by Slim that he reworked the script to make J.B. the photographer fans came to adore. Film and photography buffs alike will certainly be interested in this little-known slice of history from one of Hollywood’s most iconic films.

One of the most memorable scenes from Rear Window is its opening. The film opens with a wide-angle shot of a cramped New York apartment building on a sweltering summer day. The audience gets tiny snippets of working people’s morning routines: a man shaving, a young woman getting dressed, and a man rising from bed. Despite the complete normalcy of these actions, the scene’s framing transforms the quotidian into something glamorous and eye-catching. While it would be easy to credit this movie magic to Alfred Hitchcock, it was actually Slim Aarons’ test shots of NY apartments that inspired Hitchcock to include this first scene.

Unlike many celebrity photographers, Aarons was well-known for his dedication to simplicity: he refused to use artificial lighting, stylists, and makeup artists. Instead, he felt that his subjects and the light of their natural environment were enough. This low-key approach allowed Aarons to genuinely connect with otherwise unapproachable stars in their most private moments. As a result, Aarons has become acclaimed throughout the world for his capacity to extract an essence of effortless charm even in the most candid of settings. By taking tips from Aarons’, who could show Hollywood’s most famous celebrities in a humanized and down-to-earth light, Hitchcock was able to create a believable set and one of the most iconic openings to his films.

There are numerous parallels between Aarons and Stewart’s character, and it is rumored that Stewart actually talked to Aarons to learn about being a professional photographer as well as a veteran. Aarons served in WWII as a military photographer, but after the war decided he wanted to focus on photographing Hollywood glitz. However, he certainly had a storied past and helped Stewart form the complicated, brooding character of J.B. Jeffries. Not afraid to show his sense of humor, while filming Rear Window, Jimmy Stewart would sometimes joke “I’m Slim Aarons”. Even the tiniest details, like the apartment that Stewart sits in for the length of the film, is practically a replica of Aarons’ own home in the city.

At the same time, there are important differences between the two men. Stewart’s character in Rear Window has become an archetype of the voyeuristic male gaze. Numerous critics have understood him to be an intrusive observer, peering into the most private moments of his neighbors from the relative safety of his secluded apartment. In stark contrast, Slim Aarons was the opposite of a passive observer. He was not afraid to get up close and interact with the celebrities that he was photographing. In fact, his easy access and ability to comfortably work with famous people helped him make a name for himself as the Hollywood photographer of the 1960s and 70s. 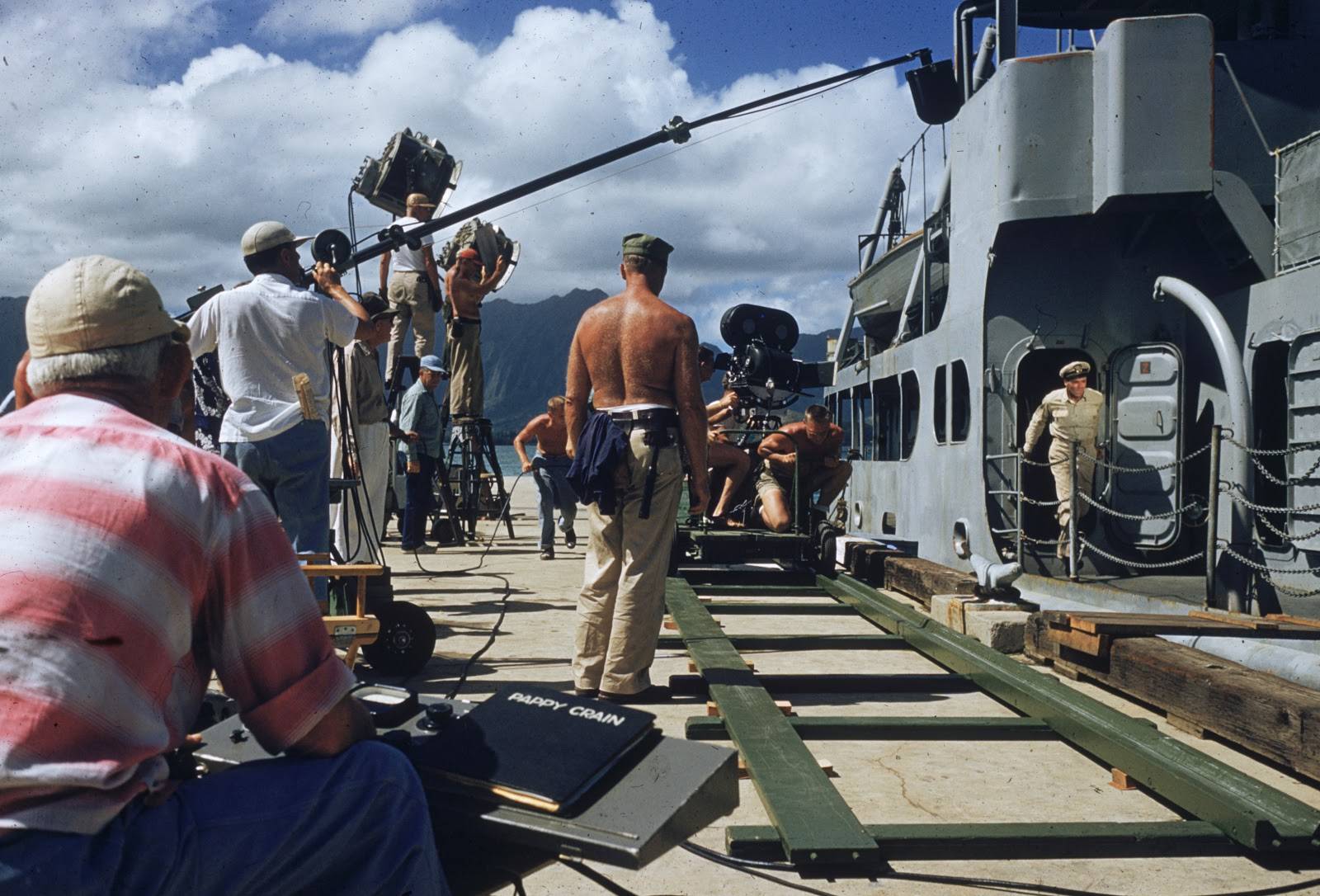 Slim Aarons’ documentation of the Mister Roberts set. Henry Fonda can be seen stepping out in his full Lieutenant Garb.

As someone who was frequently seen photographing celebrities like Stewart and Hitchcock, it should come as no surprise that Aarons made his mark on film history. He knew everybody in Hollywood and everybody in Hollywood knew him, especially in the post-WWII Golden Era. However, it is quite shocking to learn that his influence was so widespread that Aarons inspired one of the most iconic characters in cinema, and that his photographs helped create one of the most complicated, critically acclaimed sets ever built. Slim Aarons is truly a one-of-a-kind photographer, and one that anybody concerned with Hollywood history and glamour should get to know better.