Why Helmut Newton Changed His Name

The increasingly oppressive restrictions placed on Jews by the Nuremberg laws meant that his father lost control of the factory in which he manufactured buttons and buckles; he was briefly interned in a concentration camp on Kristallnacht, 9 November 1938, which finally compelled the family to leave Germany. Newton's parents fled to Argentina.  He was issued with a passport just after turning 18 and left Germany on 5 December 1938. At Trieste he boarded the Conte Rosso (along with about 200 others escaping the Nazis), intending to journey to China. After arriving in Singapore he found he was able to remain there, first briefly as a photographer for the Straits Times and then as a portrait photographer. 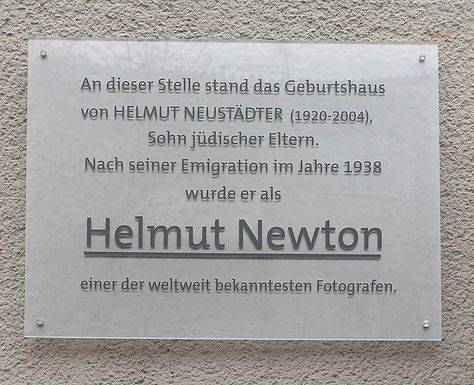 Plaque of his birth house in Schöneberg, Berlin.
Translation: At this spot used to stand the birth house of HELMUT NEUSTÄDTER (1920–2004), son of Jewish parents. After his emigration in 1938 he became known as HELMUT NEWTON, one of the most famous photographers worldwide.

Newton was interned by British authorities while in Singapore and was sent to Australia on board the Queen Mary, arriving in Sydney on 27 September 1940. Internees travelled to the camp at Tatura, Victoria, by train under armed guard. He was released from internment in 1942 and briefly worked as a fruit picker in Northern Victoria. In August 1942, he enlisted with the Australian Army and worked as a truck driver. After the war in 1945, he became a British subject and changed his name to Newton in 1946.

After Newton had changed his name, become a British subject, completed military service and married a popular actress. After having worked as a truck driver for some time, he opened up his own photography studio in Melbourne. The primary focus of his work was on fashion and theatre photography.

In the years after World War II, there was a boom in affluence so many had the discretionary funds to purchase artwork. Helmut Newton was able to meet this demand with his interesting photo art. It was thus that Helmut Newton photography was introduced to the world.